Chinese New Year is the most significant andholiday on the Chinese calendar. Apart from being a time to feast and reunite with family, the festivities are accompanied by a large array of customs and rituals. Here’s a quick introduction to some of the most significant Chinese New Year traditions. If you are a husband who have married Chinese, the followings below are something you have to learn about.

Typically, families will gather for a sumptuous reunion dinner on New Year’s Eve. A big homemade meal with multiple dishes, including steamed fish, green onion chicken and boiled meat etc. The tradition of eating fish during the New Year stems from the fact that the Chinese word "余" which means infor “surplus” or “profit” sounds similar to the word for fish, "鱼". Thus, it is believed that eating fish will bring wealth in the new year. Ifare vegetarian, you might be uncomfortable, thus Chinese prefer eatingof meat to keep full over the New Year's Eve, meaning they won't get hungry in the next year.

Redare cash gifts that are given by senior family members to their junior relations, and can range from a few dollars to quite hefty amounts. Usually, they are given from adults to children, and from married couples to their younger, unmarried family members. When you give redto the juniors, they'd usually say "thanks" or "Gong Xi Fa" in return. And if you receive redfrom seniors, please get it with two, showing respect. That is the basic ceremony in red pocket. It is also customary for bosses to present them to employees, engaging them to work harder.

New Year festivities just wouldn’t be the same without pyrotechnics. New Year’s firecrackers are made from strings of rolled red paper containing gunpowder that, when set off, leave shreds of scarlet paper their wake. Traditionally, it is believed that the loud noise of the firecrackers serves to scare away evil spirits, although nowadays firecrackers are banned in many cities for safety reasons.

In addition, most major cities, including Hong Kong and Shanghai, will put up an impressive display of fireworks around midnight to welcome in the new year.

You can always tell when Chinese New Year is around the corner because of the festive scarlet decor adorning every street, storefront and home. The color red is ubiquitous, because it is associated with wealth and good fortune in Chinese culture. Red lanterns are hungthe streets, while windows and doors are decorated with posters and papers bearing auspicious characters or phrases. Chinese knots, potted kumquats and golden orange trees are also common. 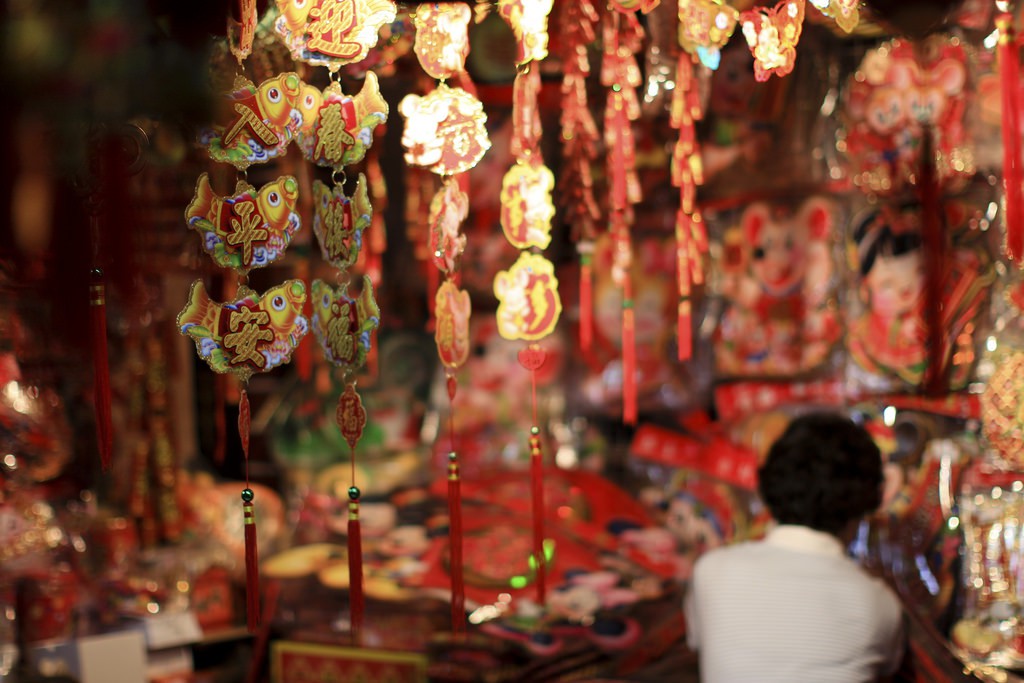 Customarily, families give their homes a thorough cleaning in the days leading up to New Day’s Day. Windows are scrubbed, floors are swept and furniture is dusted in preparation for the new year, sweeping away away the bad luck of the past year. In addition, dusting is avoided on New Year’s Day, for fear that good fortune will be swept away.

In northern China, dumplings are a popular food during Chinese New Year. In the south, it’s more common to see, a chewy pellet made from glutinous rice. Tangerine, which are considered a symbol of good fortune,also commonly eaten, displayed and gifted.

Praying at the Temple

The Lunar New Year season is a busy time for Chinese temples. Worshippers typically visit the temple on the third day of the New Year to light incense and pray to the deities for blessings and good luck in the year ahead. Many major temples will also put on festive dragon and lion dances in the courtyard.